Our Reason/Razones for sharing this HIV Testing campaign with you! 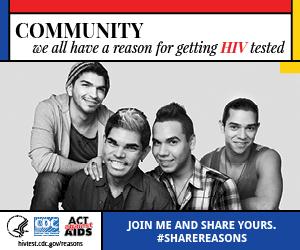 Reasons/Razones is a bilingual social marketing campaign that demonstrates why some of our cultural leaders get tested for HIV.  We’ve decided to partner with the Centers for Disease Control and prevention (CDC) to provide our communities with an essential tool for our Gay/Bi Latino men.  We’ve chosen to be part of this campaign because it’s important to focus our testing efforts in the most cost-effective and thoughtful manner possible.  Reasons/Razones provides us with culturally responsive tools and resources to bring HIV testing to our impacted communities.  In trying to get individuals that are at high risk to get tested for HIV we have oftentimes been challenged with finding encouraging, motivating acceptable messages free of stigma.    We urge you all to consider utilizing Reasons/Razones campaign materials as you plan your testing events; whether for  Pride month or National HIV testing Day.  These tools and resources facilitate an easy and efficient to use testing messages that have great potential to reach our Gay and Bisexual Latino familia.

WHAT YOU NEED TO KNOW

Latinos are the largest and fastest-growing ethnic minority in the United States. We also are one of the groups most heavily impacted by HIV. As Latinos, we are only 17% of the population, but HIV hits us harder than it should. We account for 21% of all new HIV infections in the United States. Among Latinos, gay and bisexual men bear the greatest burden of HIV infection.

Knowing your HIV status is a powerful tool. You could have HIV and still feel healthy. The only way to know if you have HIV is to get tested. HIV testing can be free, fast, and confidential. Whether you test positive or negative, you can use that knowledge to take better care of yourself and your loved ones.   GET TESTED

We all have a reason for getting tested for HIV. What’s yours?  Feel free to share with us here your own reasons to get tested.

Join us by sharing the importance of getting an HIV test with your community, friends, and family; while also sharing tips on how to protect yourself from getting HIV.   TAKE ACTION

2 thoughts on “Our Reason/Razones for sharing this HIV Testing campaign with you!”